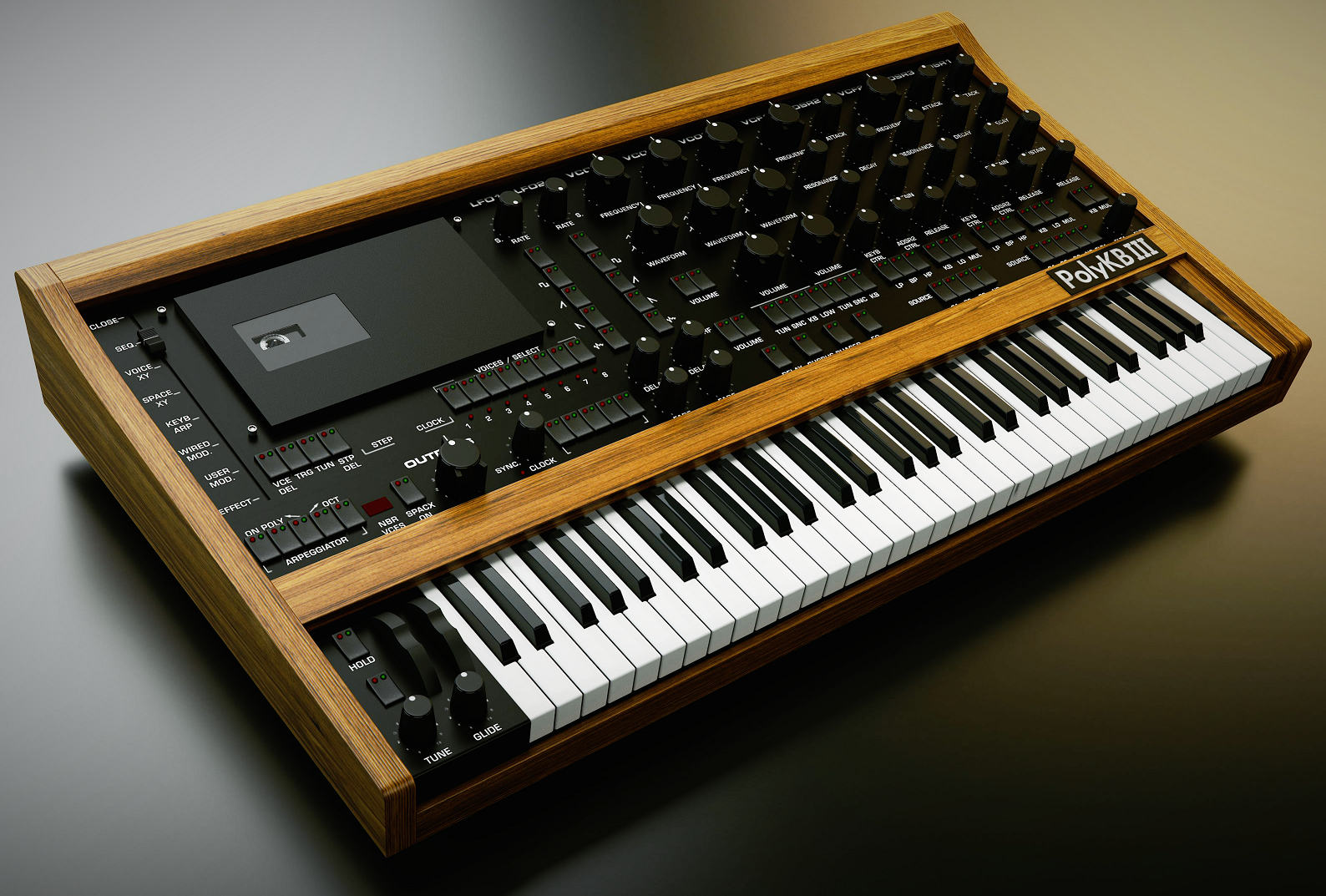 As such, it faithfully captures the sound and spirit of the ultra-rare RSF Polykobol II, including its most revolutionary feature: aliasing-free, continuously morphing VCOs (Voltage-Controlled Oscillators). On paper, and in reality, it is this that sets it apart from the many ‘run-of-the-mill’ analogue synth recreations already out there since pushy PolyKB III programmers have instant access to hundreds of different analogue-modelled waveforms — from triangle to pulse, through to sawtooth — via its flexible, free-running (VCO1, VCO2, VCO3) oscillators. On top of that, those oscillators can also be controlled by all modulation sources, so, unlike three-oscillator vintage analogue hardware synths such as the trailblazing Minimoog, for example, endless possibilities abound.

And PolyKB III is no slouch when it comes to modulation, thanks to WIRED MOD., a macro modulation matrix with over 35 ‘hardwired’ options between various MONOMOD (LFO1, [NOISE]) and POLYMOD (ADSR2, VCO2) sources and destinations — WHEEL, VCO, VCF (Voltage-Controlled Filter), ATTK (Attack), DEC (Decay), and much more besides… simply click a (virtual) button to establish a connection between different modules, then adjust amounts using the (virtual) knobs. Needless to say, PolyKB III allows adventurous programmers to delve deeper still with USER MOD., meaning that they can choose modulation sources, destinations, and amounts from four custom macro modulation matrices. More meaningfully, each of the four sources can control up to four parameters simultaneously, so 16 additional assignable modulations are available. Amounts can be positive or negative — choose freely between stacks of sources and dozens of destinations, including filter balance for morphing between filters, envelope segments, output levels, and LFO (Low Frequency Oscillator) output levels, etc. No creativity roadblocks there, then, that’s for sure!

Surely that’s more than enough for most modulation maniacs to be getting on with? Well, with PolyKB III there’s more. Much more, in fact. Firstly, there’s the VOICE XY pad, a per-voice modulator that affects each note played to sound different from previous and subsequent notes. Notably, voices are represented by movable red balls positioned within a square screen; there the vertical and horizontal position of each ball can modulate two different parameters, each with a dedicated amount knob to choose between tons of targets. Truly creative, this tool can perform endless sound-shaping tasks like no other — try tailoring analogue drift, specifically suited to the track in question, or why not go let’s go crazy-style, creating ever-changing sounds? Sounds great? Then try this on for size: SPACE XY, a dynamic stereo modulation pad, allows adventurous PolyKB III programmers to build unique stereo scenes by providing each new note played with a distinct, polyphony-controlled position, making for the widest, most intensive-sounding analogue sounds ever heard! However, even that’s not all! As well as controlling the width of the overall stereo scene, users can control microphone position and direction, and even make the whole stereo scene move courtesy of some suitably chaotic LFO functions! Finally, they can even use the highly-programmable SEQ. (sequencer) as a massive modulation-only step sequencer, creating four different sequences of up to 128 steps with each sequencer line controlling up to four different synthesis parameters via USER MOD.! Not necessarily for ‘Simple Minds’, maybe, but everything is possible — from intricate trance-gate patterns to incredible grooving parts. Phrases or sequences — with vintage or futuristic flavourings, of course — are a given with PolyKB III’s SEQ., an eight-part poly-sequencer that takes the creative concept of step sequencers one step beyond… or should that read: several steps?

Obviously, oscillators are the only possible sound source in any analogue synthesizer. Saying that, any analogue synthesizer only sounds as good as its filters. Predictably perhaps, PolyKB III virtually follows suit, though its monumental modulation capabilities clearly take things to a higher state of (synthesized) consciousness. Creamy-sounding like no other, two 0df (zero delay feedback) self-oscillating-capable filters (VCF1, VCF2) with pre-post drive modules, direct KEYB CTRL (keyboard tracking control), and each with their own dedicated envelope ensure that PolyKB III does not disappoint with yet more multiple ‘hardwired’ and custom modulation options outperforming ‘more modern’ synthesizer designs with the greatest of ease. Each oscillator can feed VCF1, VCF2, or both. Both filters can be cascaded and filter morphing with any modulation source is possible by controlling the filter balance.

But there’s more: three analogue-modelled envelopes (ADSR1, ADSR2, ADSR3) are ‘hardwired’ to the VCA (Voltage-Controlled Amplifier) and VCF1 and VCF2, but can also be used as modulation sources and destinations, including individual envelope segments, while keyboard tracking is also available for the envelopes. Additionally, ADSR1 and ADSR2 can loop, or be used as an LFO to supplement LFO1 and LFO2 and the (synced) Sample & Hold module. Moreover, all envelopes benefit from a MUL (time multiplication factor) function to help handle anything thrown at them. Those two full-featured LFOs can cumulate several waveforms, while featuring DELAY and FADE (in) functions, SYNC (to the host or internal CLOCK), and benefit from a reset/note on parameter.

What was it, then, that made the original Polykobol II sound so special, yet still sell so few? As a 1983-vintage programmable analogue polysynth based on two waveform-morphing, aliasing-free oscillators, and a self-oscillating four-pole low-pass filter, it was superficially similar-looking to — though much more highly specified than — Sequential Circuits Incorporated’s innovative Prophet-5 — the world’s first fully-programmable polyphonic synthesizer — by virtue of its beautifully finished woodwork (purportedly by Michel Lâg-Chavarria of LAG Guitars fame); whereas SCI shipped around 7,500 Prophet-5s during an impressive three-revision, four-year production run, sadly, Serge Fernandez’s RSF SA. Synthétiseurs managed a mere 30 Polykobol IIs before running into financial difficulties — hardly surprising given its technical complexity (with 500-plus parts) and attendant (22kg) weightiness with a weighty price tag (equivalent to €6,500 Euro) to match, all of which were hardly in keeping with the-then ‘art nouveau’ digital age of dominating desirable FM (Frequency Modulation) synthesis from Yamaha’s considerably cheaper ‘analogue killer’, the DX7. What goes around comes around and today XILS-lab’s PolyKB III is all set to give its competitors — virtual and analogue alike — a serious run for their money…without weight issues and at an affordable price for any serious synthesist! Looks like XILS-lab has lovingly ‘reincarnated’ the synthesizer that RSF should have invented 40 years ago, after all!