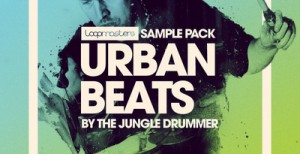 The Jungle Drummer is known all over the world, and in many different music production circles. To be one of the foremost authorities and talents when it comes to the various forms of urban beatmaking and live drumming. He is a dominant figure in the clubs and festival circuits. With live performances and DJ shows encompassing a variety of styles and genres. And he has performed with award winning bands and artists the likes of London Elektricity, Rodney P and Killa Kela, Coldcut, Radiohead producer Nigel Goldrich, Raw Hill Cru, DJ Fresh, Shy FX, A Guy Called Gerald, DJ FU, DJ Craze and The Scratch Perverts to name but a few. So it’s pretty fair to say that he has earned the stellar reputation he now enjoys everywhere he goes. In this release, the Urban Beats collection, it is absolutely jam packed with killer one-shot samples, loops and even preset sampler drum kits. Neatly organized and easy to browse, the navigation and use of these sounds was effortless.

We started with some basic loops. Then loaded up a couple of samplers and finally put them to the true test of creating custom variation kits inside of Maschine. And quickly discovered that these drums are good for more than just the genres advertised.

The samples inside of the Urban Beats collection are broken into four main categories: Dubstep, Garage & House, Hip-Hop & Funk, Jungle & Drum n’ Bass. The demo tracks heard throughout this review are just a small sampling of the potential of these drums. And could just as easily have been arranged in other styles as well. We decided not to pair these beats with any music. So you can get a true feel for the dynamic range and quality of sound that you can achieve with the samples. It’s just too easy to lose the smaller details in a full mix. And we are supposed to be critiquing just the drums after all.

All-in-all, we found the Urban Beats collection to be pretty great.

As a drummer, I personally love. It when I find some live drum samples that are actually relevant and useful without having to re-work them. To fit in the more modern and digitally-influenced music genres that tend to dominate our attention these days. These drums have some serious punch and loads of character. We had quite the good time getting a little crazy with extreme EQ and multi-channel compression processing techniques. As we pushed the boundaries of what these sounds can handle. We are happy to report that they all held up just fine. Save for a few that couldn’t quite handle some of the more experimental excursions.

A few things that stood out to us were the overall presence of the sounds in these samples and the true-to-life color and character of the drums and percussion instruments themselves. This, of course, begins with a great capture of the audio being recorded. But it also speaks highly of the attention to detail and time spent to ensure each sample in this set can stand on its own as well as play nicely with others in a mix. We are happy to give the Urban Beats collection from Jungle Drummer our endorsement and seal of approval!