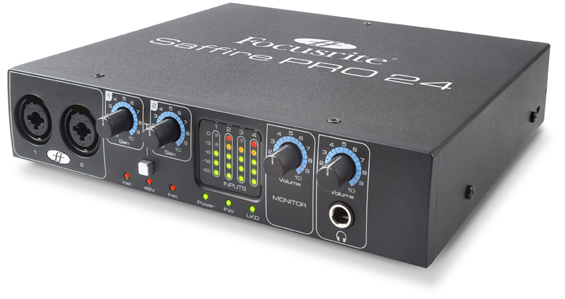 Saffire Pro 24 is a 16-in/8-out, 24 bit, 96 kHz firewire audio interface by Focusrite. It is equipped with Focusrite’s award-winning mic preamps and is compatible with any DAW on both Mac and Windows computers.

The firewire connection will guarantee faster data transmission than USB 2.0. For Mac users, Saffire Pro 24 is fully compatible with Thunderbolt connection, by using a simple  Firewire to Thunderbolt adapter.

From left to right, the front panel shows two combo XLR/TRS inputs, with independent gain knobs. A switch will turn on/off the included +48V phantom power switch for inputs 1 and 2.

Saffire Pro 24 comes with a 5-LED meter for each analog input channel.

The front panel also has a Monitor knob and an independent phones output, with independent gain control.

The rear panel has in/out SPDIF connections, a power switch, a power supply connector (adapter included) and Midi In/Out jacks. There’s also a firewire jack, as well as an optical input socket, which will make it possible to connect the audio interface to any ADAT 8-channel preamp for additional inputs. The rear panel also has six analog outputs, and two analog TRS inputs.

Included is Saffire MixControl, a mixer and router software. It provides flexible output routing and monitoring.

– 2 combo XLR/TRS inputs with onboard preamps;