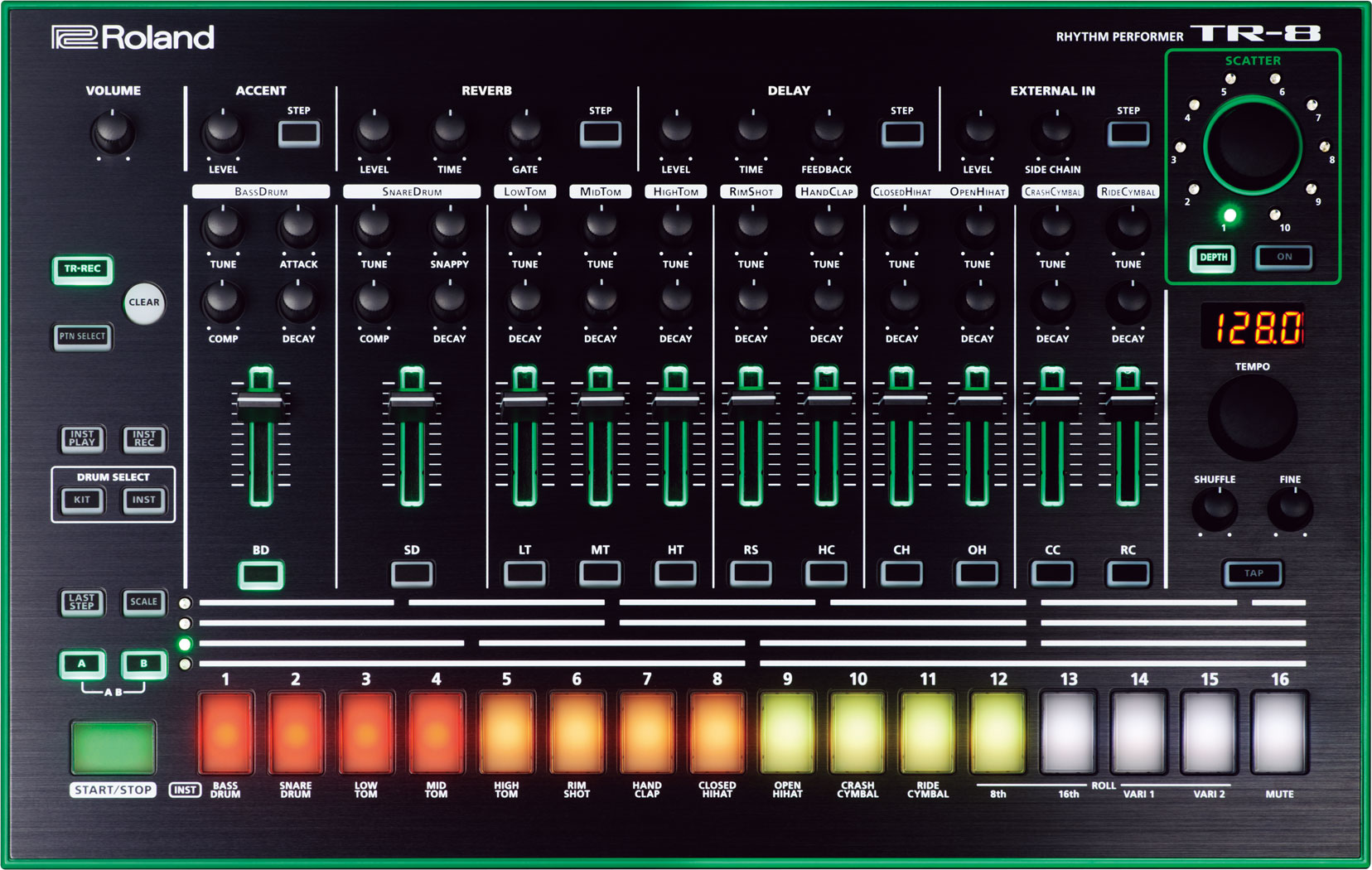 Round the back we see a headphone output, two quarter inch Mix outputs (Mono / Left & Right), two assignable outputs, and two inputs. Once we pass the Midi in and out sockets, we reach a USB port, an on / off switch and input for the external power adapter.

With the front screen only displaying sparse tempo information, you begin to understand that this is a performance tool right off the bat. Sure you can hook it up to a computer via USB to get under the hood, but that’s not what the Roland TR-8 is fundamentally about. It’s about live use, a performance instrument.

The manual that comes with it is very basic and updating the software seems tricky at first, though you pick it up quickly enough.

So how does it sound ?

As soon as its first switched on and you jump into playing a pattern, picking a kit then tuning the bass drum, a huge smile breaks out on your face. The sounds, both of the 909 and the 808 sound so like the original its uncanny. Roland TR-8 have done an amazing job with its Analog Circuit Behaviour (ACB) in their digital recreations of these machines. If you’ve had the pleasure of using either an 808 or 909, you’ll be right at home with the TR-8. All of the kits and the individual sounds are fantasic and delivers even more fun through the tweakable dials for each sound.

In addition to the move to digital, Roland TR-8 have also added effects this time around. There’s a reverb and delay both with tweakable parameters and control over the external in, functioning as a sidechain though all these effects can be tripped from the step sequencer if you want to. Finally Roland’s also thrown in a new Scatter effect section with dial in parameters which all helps into the live performance aspects of this machine. You really need to jam with this to appreciate its playability.

The only minor drawback is its having 4 outputs, something the original units didn’t lack, but then hooked up to a computer you can always go after sounds individually at a time. However, once you’ve hooked it up to a computer though, the Roland TR-8 also functions as an audio interface as well.

What’s not to love about the TR-8 ? It’s a modern day interpretation of two classical works of arts, in one digital form. It may not be the original analogue sound generating classics of the golden age but then you’d be very hard pressed to notice the difference sonically. Your wallet however will definitely notice the difference though.