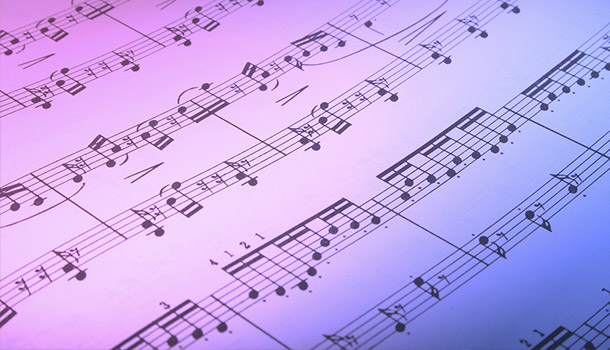 In this lesson, we will learn a few tips on how to create melodies over chord progressions. The idea here is to show you how harmony and melody are connected. This basic idea is the key (pun intended) to write good and concise melodies.

Let’s use the following chord progression, in C Major key:

And let’s consider this chord progression as being the ‘song’ that we want to have the melody written.

Basically, try to write notes that are included in the song’s key. For example, if the song is in C Major key, use C Major scale notes, and so on.

Actually, we can play any note in a melody, even if it’s not included in the song’s key. We can play, for example, a F# note in a C Major song. It will depend on the current chord, the music genre and also the note duration. We will cover this subject in a future lesson.

OK, so you created a melody using the current key notes, but it didn’t sound good. Why? Because a good melody not only follows the song key but also the chord notes. For example, if the current chord is F, try to write the melody using mostly F notes. Here’s an example using only chord notes:

In a 4/4 bar, usually the 1st beat has the strongest accent and 3rd beat is the next strongest. Those are the ‘on-beats’. Beats 2 and 4 are the ‘off-beats’. So, if you want your melody to sound good, place chord notes on beats 1 and 3, and other scale notes on beats 2 and 4. For example:

That’s why if you play a C Major chord and write a whole-note F as the melody, the result won’t sound too good.

If you’re creating a reggae tune, beats 2 and 4 will be the strongest. So, these are the beats which will have the chord notes in the melody.

Notice that we are covering so far melodies written using quarter, half and whole notes.

What if the melody has 8th notes or even 16th notes? Here’s how to deal with that:

Let’s consider a bar made only with 8th notes, like the following image:

The numbers indicate the bar beats. Notice that each beat has two 8th notes.

A melody will always sound good if you use chord notes in the first 8th note of each beat. Here’s an example:

Notice that you can have either chord or scale notes in the remaining parts.

The previous idea will work also when there are bars with 16th notes, such as the following image:

So, similarly, place chord notes in the first 16th note of a beat:

Those examples are just to show you how to create melodies that will sound ‘in tune’ when played along with the correspondent chords.

Usually, a melody consists of a mix of note duration (and rest duration as well), so use the previous topics as a general guide on how to write a good melody.

Notice that each music genre has a specific approach on melodies. What we learned in this lesson can be applied to pop, rock, reggae, country, folk, and much more.

Some genres such as jazz, blues and Brazilian jazz have an extensive use of chromatic approaches, outside playing and other techniques to create song melodies and also improvisations.

Now, use the chord progression from this exercise and create your own melodies.

In the next lesson, we will continue to practice melody writing.