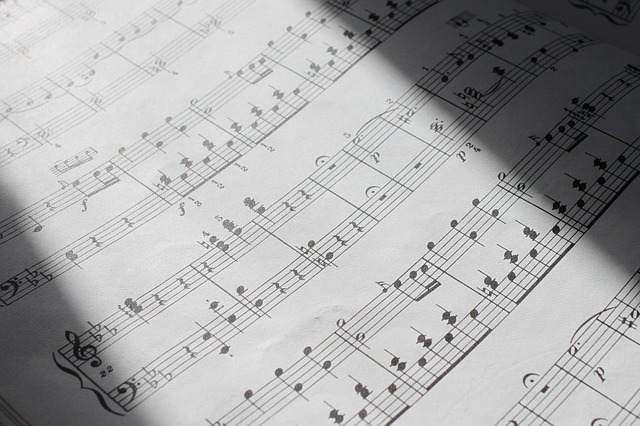 Today we will learn about chord voicing. ‘Voicing’ is how we distribute notes in a chord, that is, which ones are on the top, in the middle, doubled, and so on.

Why do musicians do that? That’s simple: to make the chords sound good.

To better understand this concept, let’s use C major triad in the root position as an example. Remember, root position occurs when we play a chord with the root as the lowest note.

All examples will show a C major triad, but with a different distribution of notes through the staff.

Example 1 shows the C major chord in close position, which is the most compact voicing. It is the most popular voicing for triads, but sometimes it’s not the best choice. The chord formula is 1-3-5.

Notice how the notes have a wider spacing. We play the root and the 5th, but we place the 3rd one octave above the close position.

In this example, we just added one more 5th above the 3rd. Notice that when we create chord voicings, it’s very usual to double chord notes.

In this example, we chose to double the root. The chord formula is 1-5-1-3

Notice that it’s possible to create several different voicings. It will all depend on how the composer wants the chord to sound. Also, is very common for musicians to use different chord voicings when they play a solo piece so that it would be more comfortable to play the melody along with the harmony.

Chord voicing become a lot more interesting when we play other chord types, such as 7th chords, 9th chords, etc.

Another aspect of chord voicing for piano and keyboard players is how we distribute chord notes through the hands. When we play a chord, we don’t need to play it only with the left or the right hand. We can distribute the notes on both hands.

You will notice that’s not difficult at all. Let’s use as an example, the Cmaj7 chord in root position, using the following voicing:

Play it and notice how it sounds, compared to the chord in close position.

This is how it would look like using music notation:

That’s it! In the next lesson, we will learn more about chord voicing.