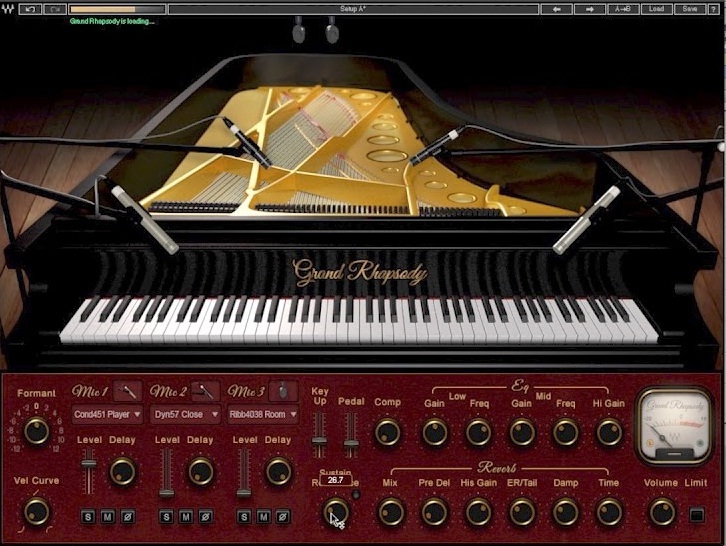 Waves, the renowned developer of audio plugins and signal processors, is releasing their fourth virtual instrument: the Grand Rhapsody Piano. This virtual instrument is a recreation of the Fazioli F228 grand piano located in Metropolis studios (London). The Fazioli piano was Freddie Mercury’s favorite and it was also used to record pop hits from famous artists, such as Adele.

Waves made a remarkable work by sampling the Fazioli piano. Eight microphones were used, including condensers, dynamics and ribbons, so that they could capture all details and nuances from the instrument.

The instrument has several options for customizing the sound. According to Waves, it will be possible to choose up to three microphones to adjust the level and delay time. There are controls for mute, solo and phase inversion as well. Each mic will be displayed on the screen exactly where they were placed during the recording.

The Grand Rhapsody Piano will also have controls for sustain resonance, pedal and key up levels. FX section includes a compressor, with automatic settings – there’s just one knob to adjust makeup gain. A multi-band EQ is included, as well as a Waves reverb built-in, with controls for pre-delay, early reflection, gain, damp and time. There’s also a limiter included, with an on/off switch.

Waves is about to release the instrument, and since it’s the fourth virtual instrument (the previous ones are Electric 88, Electric 200 and Electric Grand 80 pianos), the company is preparing to release also a bundle, with promotional prices.