Best Drum Machines of All Time 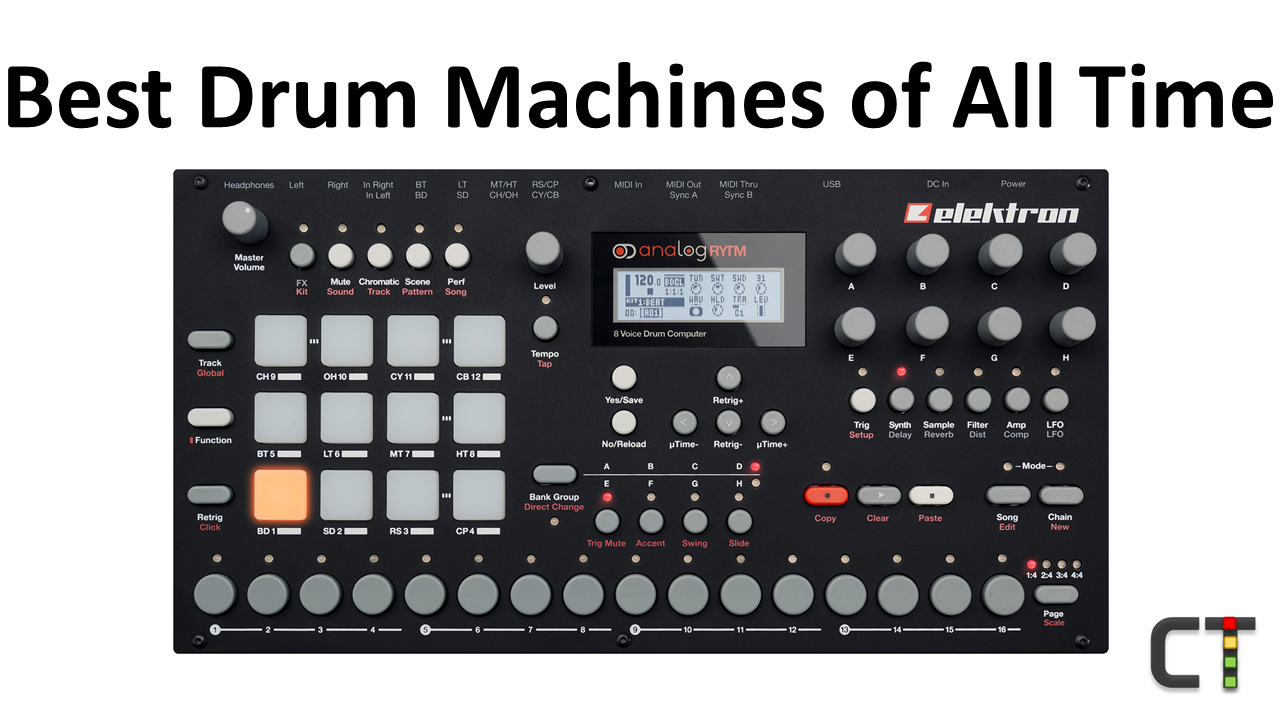 Best Drum Machines of all time ? Let’s just get right to the list !

Hailing from 1978, the Electro Harmonix Digital Rhythmn Matrix produced 32 different rhythmns from 8 drum sounds which even now are still very much useable.
That’s if you can ever track one down.
Even on Ebay – finding a DRM 32 is quite a challenge these days.

Moving on to 1979, the year which saw Roland release their first rhythm machine to use a microprocessor. The CR 78 offered up 14 analogue drum tones, with 34 presets but more importantly 4 programmable memory locations for storing patterns.
These are probably a bit more common on the second hand market these days than say the DRM 32, but that doesn’t mean it will be cheap though.
Expect these to change hands for serious money.

First released in 1980 onto an unsuspecting world, this Transistor Rhythmn drum machine or Rhythmn Composer, has featured on more hit records than any other.
This legendary drum machine and legendary Kick Drum sound was a giant in hip hop and electronic music. Units are still available on the second hand market but command legendary prices.

Released in 1981 and featuring 24 drum sounds and 8 voice polyphony and 8 outputs, the DMX also featured a card slot for changing drum sounds.
The DMX found itself adopted by many artists and genres during the 80s due to it’s punchy sounding drums, which were samples of actual instruments.

Released in 1982 following up on 1980’s LM-1. This year saw Linn introducing more features, better quality samples and a more affordable price with the LM-2. The LM-2 found its way on an abundance of 1980’s music albums including album’s from Prince, Peter Gabriel and Jean Michel Jarre. Sampling quality had by this time moved up to 35KHz but there were options to upgrade the LM-2 using new chips. Another feature was the ability to store patterns and back them up onto cassette tapes. Remember them ?

1984 saw Roland release the successor to its TR 808, The Roland TR 909. Part Analogue, Part Sample Based, but with added Midi control, the TR 909 played a monumental part in Electronic music history and still does to this day. Similarly to the TR 808, expect to see these units changing hands for lots of money these days.

Released in 1987 Emu’s Phrase Sampler was a combination Drum Machine and Sequencer with a 12 bit Sampling resolution. Hugely associated with Hip Hop during the late 80s and 90s. It’s limited Sampling time was overcome with many artists sampling 33 and 1/3 rmpm records in at 44rpm.

Debuting in 1990 and arguably one of the most popular drum machines ever made, probably due to its features and affordable price.
The SR 16 boasted over 230 sounds, complete midi support and built in effects.
the SR-16 also featured 16 voice polyphony and 2 stereo pair outputs.
It’s straight forward operation meant you could be up and running in no time.
Although it’s sound palette was geared more to rock – you can dig deep enough into the machine and there are electronic type drum sounds to be found.

Roland’s 2014 homeage to both the TR-909 and TR-808 was a masterstroke, making both those trademark sounds affordable and attainable.
Bought up to date with USB connectivity, built in effects and further doubling up as an audio interface, this machine continues to please old fans and gain new ones.
Then shortly after the machine was released, Roland also announced the TR 707 and TR 727 sound set options for the TR-8. Sweet.

Also released in 2014 was Elektron’s Analog Rthm.
Probably the current flagship drum machine you can lay your hands on, this is one fantastically built and sounding drum machine.
Essentially an 8 voice analogue drum machine but with sample support, Analogue filter and distortion per voice coupled with that Elektron sequencer this is a truly exceptional performance instrument.

So that’s our list, our favourites of all time. Is your’s here ? Drop us some comments below if you agree or disagree.

Also – hit the subscribe box so you can catch more of our tutorials and videos. Or head over to CreatingTracks.com for more.