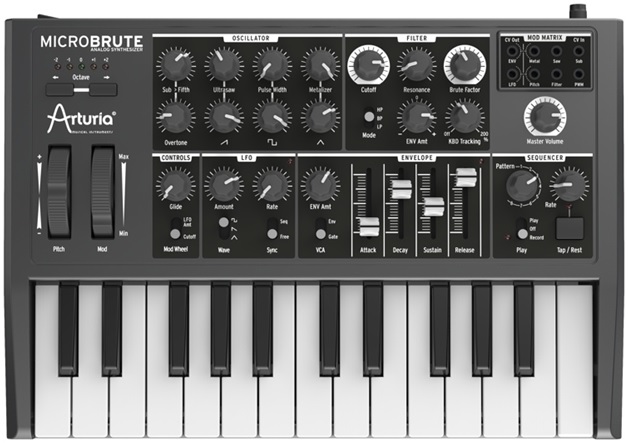 Microbrute is a 100% analog, semi-modular, mono synth with astounding sonic possibilities. With one oscillator, three waveforms, a filter, LFO and shape controls, the product is an excellent (and not expensive) choice for an analog synth.

At first sight, Microbrute may appear small and simple, but it has impressive resources. The single oscillator generates three waveforms (saw, triangle and square), which can be freely mixed. The oscillator part has also wave modifiers, such as the Overtone – a sub oscillator that can modify the square wave, creating complex harmonics to the sound; the Ultrasaw – adds two copies of the original saw wave, with the possibility of changing pitch and phase; and the Metalizer – the triangle modifier that adds harmonics to the original sound making it sound “metalized”.

The filter section has typical cutoff and resonance controls and works with three filter types: lowpass, bandpass and highpass.

Microbrute has a built-in mod matrix, which is a semi-modular feature, making it possible a wide range of modulation routing options.

The product comes with a step sequencer, allowing the user to create eight different sequences and store them in the internal memory.

Microbrute can be purchased at official dealers for around $300. Visit Arturia’s website: www.arturia.com